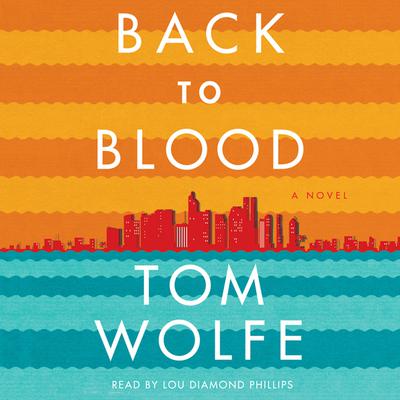 Back to Blood: A Novel

An Amazon Best Book of the Month, October 2012

SoundCommentary.com’s The Best of the Best, 2013

Based on the same sort of detailed, on-scene, high-energy reporting that powered Tom Wolfe's previous bestselling novels, Back to Blood is another brilliant, spot-on, scrupulous, and often hilarious reckoning with our times.

“A soapy, gripping, and sometimes glib novel.” —New York Times
“Wolfe remains as skillful as ever in texturing the novel’s terrain, from the ‘prairie of concrete’ formed by Hialeah’s front yards to a tired retirement complex up in Broward County where ‘the little iron balconettes and the aluminum frames for the sliding doors looked as if they were about to fall off and die in a pile.” —New York Times Book Review
“A shrewd, riling, and exciting tale of a volatile, divisive, sun-seared city where ‘everybody hates everybody.’” —Booklist (starred review)
“Wolfe returns to fine form with this zingy, mile-a-minute novel of life in the weird confines of Miami…a welcome pleasure from an old master and the best from his pen in a long while.” —Kirkus Reviews (starred review)
“Actor Lou Diamond Phillips portrays Nestor Comacho, a man with both pride in his heritage and a thirst to be fully assimilated into America’s ever-changing culture. Ultimately, he performs a death-defying act that is perceived as heroic in the white community and as a betrayal in the Latin community. Phillips relishes the dramatic pauses and changes pace to match Nestor’s inner struggle and frustrations.” —AudioFile
“Wolfe creates his own Miami sound machine—noisy, chaotic, infused with tropical rhythms, and fueled by the American dream.” —Publishers Weekly
“Wolfe, Master of the New Journalism Universe, has done his homework and done it well.” —Miami Herald
“[Wolfe] has not lost his gift for panoramic presentation; Back to Blood surges with its large ensemble cast of Floridians and immigrants with mixed histories and conflicting agendas. This sun-bronzed band of sailors, crack dealers, art enthusiasts, porn addicts, insomniacs, and love-struck romantics keep the fiction bristling with meaning even as the action moves forward.” —Barnes & Noble, editorial review
“Actor Lou Diamond Phillips does full justice to Wolfe’s sprawling, multicharacter novel of present day Miami, with its amazing mixture of ethnicities and cultures. He can handle Cubans, African Americans, Russians, Haitians, and even elderly retired New Yorkers with ease and authority.”  —SoundCommentary.com
“Back to Blood is a return to form, a work that solidifies Wolfe’s stature as one of the best. Using his incisive journalistic skills, his flair for the cinematic moment, and his laugh-out-loud sense of humor, Wolfe takes the disparate types in and around Miami to create a tapestry of memorable scenes and characters. The result is entertaining, revealing, and perhaps even bigger than the sum of its parts. This is a book that will do for Miami what Wolfe’s mega-hit The Bonfire of the Vanities did for New York.” —Amazon.com, editorial review

Tom Wolfe (1931–2018) was the author of numerous books considered contemporary classics, including The Electric Kool-Aid Acid Test, The Right Stuff, and The Bonfire of the Vanities, among others, and several of his books have been made into major motion pictures. He was also a journalist and founder of the New Journalism movement of the 1960s and 1970s. He is credited with introducing such terms as “the right stuff,” “radical chic,” “the Me Decade,” and “good ol’ boy” into the English lexicon. A native of Richmond, he earned his BA degree at Washington and Lee University and a PhD in American studies at Yale.