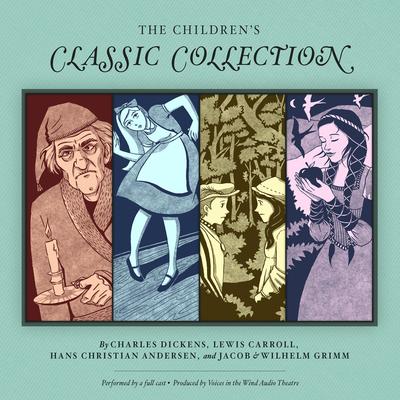 This delightful collection of children’s stories is perfect listening for the whole family. Featured are four beloved stories to entice your imagination, including A Christmas Carol by Charles Dickens, Alice in Wonderland by Lewis Carroll, The Bell by Hans Christian Andersen, and Snow White by Jacob and Wilhelm Grimm. Each story is performed by a full cast of voice actors with sound effects and music.

This delightful collection of children’s stories is perfect listening for the whole family. Featured are four beloved stories to entice your imagination, including A Christmas Carol by Charles Dickens, Alice in Wonderland by Lewis Carroll, The Bell by Hans Christian Andersen, and Snow White by Jacob and Wilhelm Grimm.

Each story is performed by a full cast of voice actors with sound effects and music.

“[Narrator Georgia Lee] Schultz’s Alice was the fulcrum of the entire revival as she not only narrated the story but communicated her thoughts to listeners in asides. It was a tribute to her acting skill that she came across as a level-headed personality, someone who remained distinctly unfazed by what was happening around her. Hence her ability to treat the entire journey as a dream at the end.” —Radio Drama Reviews Online on Alice in Wonderland
“A resplendent narration and enchanting sound effects make this edition of Grimm’s 1812 fairy tale quite irresistible. Georgia Lee Schultz’s warm voice is ideal for the portrayal of Snow White, particularly when she talks to her birds. Most impressive is Mary Ellen Herder’s Evil Queen; her harsh voice and disturbing cackle are spot-on. First-rate sound effects add atmosphere; for example, when the Evil Queen persuades Snow White to eat the poisoned apple, the crunch is as realistic as the sounds of the birds.” —AudioFile on Snow White
“Adapted from the classic Grimm fairy tale, this audio drama of Snow White and the Seven Dwarves follows the source material well, yet adds some new elements and characters that fans of the Disney film will find interesting and compelling. A sort of secret history of what really happened…comparisons aside, this truly has feel of a fairy tale…it’s perfect for kids and adults and for those awesome parents who want to introduce their children to audio drama at an early age.” —Michael Bergonzi, Audio Drama Reviews (5/5 stars), on Snow White
“The zaniness of Carroll’s kaleidoscopic story of Alice is realized through music tied to action (particularly shrinking and growing), the voice work of Barbara Rosenblat playing (among others) both the Cheshire Cat and the Queen of Hearts and enhancing background sounds, such as ocean waves and bird calls when Alice’s tears become a sea.” —Library Journal (starred audio review) on Alice in Wonderland
“The Queen, the Duchess, the Dormouse, and the Mad Hatter. Award-winning voice actor Barbara Rosenblat leads an able cast in giving proper nineteenth-century accents and voices to all our favorite iconic characters from one of the most beloved children’s classics in the English language. Energetic newcomer Georgia Lee Schultz provides Alice with an updated and nicely understandable American accent and is especially good with the many whispered asides that stitch this adapted version together. For many, Alice in Wonderland is a special cultural touchstone, even with all the commercials, videos, and pop songs that refer to it, so it is always refreshing to hear the language and intended story of the original.” —AudioFile on Alice in Wonderland
“Perfect from the first sentence to the very last.” —WKAR on A Christmas Carol
“A Christmas Carol has been adopted into radio drama by many people over the years, but few better than Voices in the Wind Audio Theatre from Canada.” —Fred Greenhalgh, Host of the Radio Drama Revival Podcast, on A Christmas Carol
“Zarr and Dupuis’ production for the Canada-based Voices in the Wind Audio Theatre was notable for its lack of sentimentality: despite the happy ending, they emphasized the significance of Christmas as the time of year when individuals should take a long hard look at themselves and consider whether they need to reform. Would that everyone could follow Scrooge’s example.” —Laurence Raw, Radio Drama Reviews Online, on A Christmas Carol

Charles Dickens (1812–1870) was born in Landport, Portsmouth, England, the second of eight children in a family continually plagued by debt. A legacy brought release from the nightmare of debtors’ prison and child labor and afforded him a few years of formal schooling. He worked as an attorney’s clerk and newspaper reporter until his early writings brought him the amazing success that was to be his for the remainder of his life. He was the most popular English novelist of the Victorian era, and he remains popular, responsible for some of English literature’s most iconic characters.

Lewis Carroll was the pen name of Charles Lutwidge Dodgson (1832–1898), English author, mathematician, and photographer. One of eleven children of a scholarly country parson, he studied mathematics at Oxford, obtained a university post, and then was ordained as a deacon but found true success with his masterpiece, Alice’s Adventures Under Ground, now known as Alice’s Adventures in Wonderland, which originated as a story told to a young friend, Alice Liddell, during a boating trip on the Thames. Among his other works are Through the Looking-Glass, and What Alice Found There, The Hunting of the Snark, and Jabberwocky.

Hans Christian Andersen (1805–1875) was born in Odense, Denmark, the son of a poor shoemaker and a washerwoman. As a young teenager, he became quite well known in Odense as a reciter of drama and as a singer. When he was fourteen, he set off for the capital, Copenhagen, determined to become a national success on the stage. He failed miserably, but made some influential friends in the capital who got him into school to remedy his lack of proper education. In 1829 his first book was published. After that, books came out at regular intervals. His stories began to be translated into English as early as 1846. Since then, numerous editions, and more recently Hollywood songs and Disney cartoons, have helped to ensure the continuing popularity of the stories in the English-speaking world.

The Brothers Grimm were German academics, linguists, cultural researchers, and authors. They are among the most well-known storytellers of European folk tales, and their work popularized such stories as “Cinderella,” “The Frog Prince,” “Hansel and Gretel,” “Rapunzel,” “Rumpelstiltskin,” and “Snow White.” Their first collection of folk tales, Children’s and Household Tales, was published in 1812. The popularity of the Grimms’ collected folk tales has endured well beyond their lifetimes. The tales are available in hundreds of translations and have been made into popular Disney films, including Snow White and the Seven Dwarfs, Sleeping Beauty, and Cinderella.