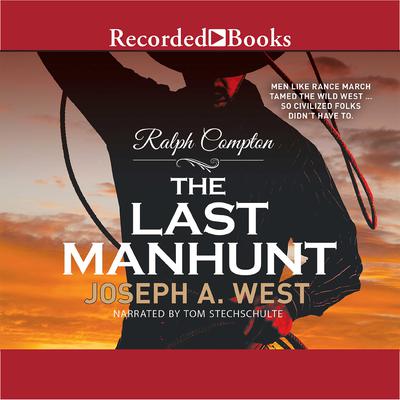 By Joseph A. West and Ralph Compton
Read by Tom Stechschulte

Ralph Compton (1934–1998) stood six-foot-eight without his boots. His first novel in the Trail Drive series, The Goodnight Trail, was a finalist for the Western Writers of America Medicine Pipe Bearer Award for best debut novel. He was also the author of the Sundown Rider series and the Border Empire series. A native of St. Clair County, Alabama, Compton worked as a musician, a radio announcer, a songwriter, and a newspaper columnist before turning to writing westerns. A number of his later works also appeared on the USA Today bestseller list. Since his death, a number of works have been published under Compton’s byline, including The Alamosa Trail, Riders of Judgement, The Abilene Trail, The Bozeman Trail, and others.

Joseph A. West was born and raised in Scotland. At nineteen years old, he became a police officer, but soon turned his love of writing into a career as a journalist, working for the Daily Mirror in London and the National Enquirer in the US, among others. Traveling the world in search of stories, West almost froze to death on an Alaska mountain, and a spider bite nearly killed him in the Amazon rainforest. Now a full-time novelist, West and his wife Emily reside in sunny Palm Beach, Florida.