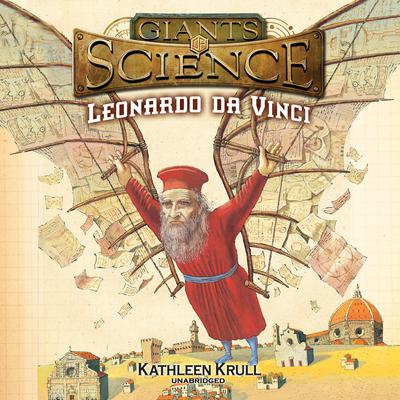 The Giants of Science Series: Book 1

Leonardo da Vinci’s notebooks are mind-boggling evidence of a fifteenth-century scientific genius standing at the edge of the modern world, basing his ideas on observation and experimentation. This book will change children’s ideas of who Leonardo was and what it means to be a scientist.

Leonardo da Vinci’s notebooks are mind-boggling evidence of a fifteenth-century scientific genius standing at the edge of the modern world, basing his ideas on observation and experimentation. This book will change children’s ideas of who Leonardo was and what it means to be a scientist.

“Krull convincingly portrays her subject, noting the Renaissance man’s remarkably far-reaching accomplishments while also conveying his humanity and sense of humor. She places him in the context of his times…[and] the vital link between science and art that endured throughout Leonardo’s life…With an inviting, conversational narrative…this series launches with an impressive start.” —Publishers Weekly (starred review)
“With a totally captivating opening and a conversational writing style…the book moves along at a steady clip and adds details to bring da Vinci and his times to life…Readers will come away from this accessible volume with an understanding of who Leonardo was and a desire to know more about this fascinating, brilliant man.” —School Library Journal (starred review)
“The breezy text draws heavily from Leonardo’s own writings, discussing his groundbreaking forays into anatomy, water management and flight, always propelled by a commitment to direct scientific observation. That Krull manages, in some 100-plus text pages, to present Leonardo’s scientific accomplishments while at the same time conveying a sense of the man himself…is no mean feat and bodes well for the succeeding volumes in the series.” —Kirkus Reviews (starred review)

Kathleen Krull (1952–2021) was a multiaward–winning children’s book author. She graduated from Lawrence University in Appleton, Wisconsin, and worked for four companies as a children’s book editor. While on the job, she wrote mysteries in the Trixie Belden series and other books. She then began working at home, writing her own books and getting the chance to explore subjects she was passionate about, including history, music, and extraordinary people. Awards for her body of work include the 2011 Children’s Book Guild Nonfiction Award, Leo Politi Golden Author Award, Lucia Russell Briggs Distinguished Achievement Award, California Reading Association’s Armin R. Schulz Literacy Award for promoting social justice thru books 2016, and the International Literary Association and Greater San Diego Reading Association Celebrate Literacy Award, among others.