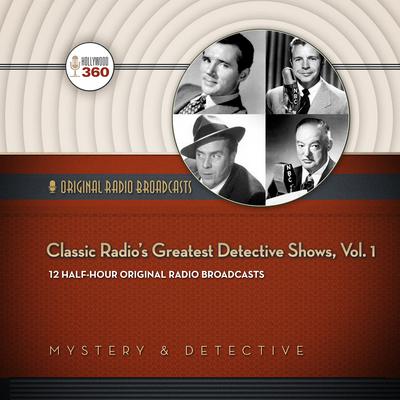 This collection contains twelve of the greatest detective shows ever broadcast during the golden age of radio. You'll hear Sydney Greenstreet as Nero Wolfe, Howard Duff as Sam Spade, Tom Conway and Nigel Bruce as Sherlock Holmes and Doctor Watson, Dick Powell as Richard Diamond, Edmond O'Brien as Johnny Dollar, and Les Tremayne as Nick Charles, a.k.a. "The Thin Man"—plus many more gumshoes, including Boston Blackie, Philip Marlowe, The Fat Man, and others. With this incredible collection, relive twelve of the best classic radio detective shows from yesterday and the legendary stars who made them great.

The Adventures of Nero Wolfe, "The Case of the Vanishing Shells," starring Sydney Greenstreet

The New Adventures of Sherlock Holmes, "The Adventure of the Black Angus," starring Tom Conway and Nigel Bruce

The Falcon, "The Case of the Babbling Brooks," starring Les Damon

Let George Do It, "Journey into Hate," starring Bob Bailey

The Thin Man, "The Adventure of the Passionate Palooka," starring Les Tremayne