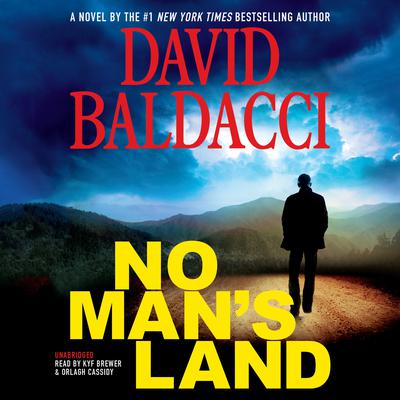 By David Baldacci
Read by Kyf Brewer  and Orlagh Cassidy

John Puller’s mother, Jackie, vanished thirty years ago from Fort Monroe, Virginia, when Puller was just a boy. Paul Rogers has been in prison for ten years. But twenty years before that, he was at Fort Monroe. One night three decades ago, Puller’s and Rogers’ worlds collided with devastating results, and the truth has been buried ever since. Until now.

John Puller’s mother, Jackie, vanished thirty years ago from Fort Monroe, Virginia, when Puller was just a boy. Paul Rogers has been in prison for ten years. But twenty years before that, he was at Fort Monroe. One night three decades ago, Puller’s and Rogers’ worlds collided with devastating results, and the truth has been buried ever since. Until now.

“Baldacci’s fans won’t be disappointed with this thriller’s layers of intrigue. Narrators Kyf Brewer and Orlagh Cassidy provide excellent dialogue and action that move the story at a rapid pace…The two narrators create realistic dialogue, and Cassidy’s feminine voice contrasts well with Brewer’s…[and] excellent pacing keeps the listener engaged.” —AudioFile
“An action-packed ride…Otherworld technology is a brilliant addition to the murder mysteries as Puller struggles to solve them all. Baldacci once again partners him with Veronica Knox, making for a lethal and legendary combination. Anticipation intensifies on each page as Puller, Knox, and Rogers approach their goals.” —RT Book Reviews (4½ stars, Top Pick!)
[A novel of] dramatic depth and intensity...an unforgettable read...Action-packed and thought-provoking. —Associated Press
Bestseller Baldacci makes the implausible plausible in his riveting fourth thriller featuring U.S. Army criminal investigator John Puller...Baldacci maintains tension throughout and imbues his characters with enough humanity to make readers care what happens to them. —Publishers Weekly
This thriller, featuring U.S. Army criminal investigator John Puller, has a very plausible theme with a compelling and action-packed plot....[A] riveting and heart-wrenching story...NO MAN'S LAND is an edge-of-your-seat thriller. Readers will be hooked from page one. —Military Press
David Baldacci is one of America's favorite mystery writers, and he has earned that adulation fair and square. He is constantly turning out one readable and enjoyable adventure after another. His latest novel NO MAN'S LAND is his fourth John Puller story and it is a good one. It is fast reading from the start as the pages grab the readers' interest and off they go. —Huffington Post
One of the most compelling characters in David Baldacci's thrillers is John Puller, a crackerjack investigator of military crimes...Twists and turns come fast and furious in the best Baldacci tradition. THE ESCAPE is much more than a thriller. It's a moving tale of two military brothers and their father, a retired Army general and fighting legend now suffering from dementia. Emotionally intense, THE ESCAPE is Baldacci's best to date. —Associated Press on The Escape
A heck of an opening chapter, guaranteed to jettison readers into hours of addictive reading...Baldacci's last few books have been among the best in his long, busy career, and THE ESCAPE stands near the top for sheer adrenalin-fueled entertainment. —Richmond Times-Dispatch on The Escape
Highly entertaining...THE ESCAPE is a terrific read. —CT News on The Escape
Baldacci is a master when it comes to writing about small-town conspiracies and a lone hero who fights against all odds to clean up corruption... It might seem straightforward, but the final reveal will surprise even hardcore thriller junkies. —The Washington Post on The Forgotten
Rife with intriguing, memorable characters and tense situations....deftly providing solid escapism in an exceptionally fast-paced tale. —Lansing State Journal on The Forgotten
Readers expect excitement and intrigue in David Baldacci's books, and Zero Day is no exception...As Baldacci's new hero narrowly escapes countless close calls, the pairing of the author's imagination and knowledge create a wild ride for the reader. Puller is gutsy, brash and likable. Best of all, he survives to reappear in the next book of this new series. —The Free-Lance Star on Zero Day

David Baldacci is one of the world’s favorite storytellers and a global bestselling author, with twenty-one of his novels making the #1 spot on the New York Times bestsellers list. In 2011 he was inducted into the International Crime Writing Hall of Fame. His books are published in over forty-five languages and in more than eighty countries, with 150 million copies sold worldwide. His works have been adapted for both feature film and television. He is also the cofounder, along with his wife, of the Wish You Well Foundation, a nonprofit organization dedicated to supporting literacy efforts across America.