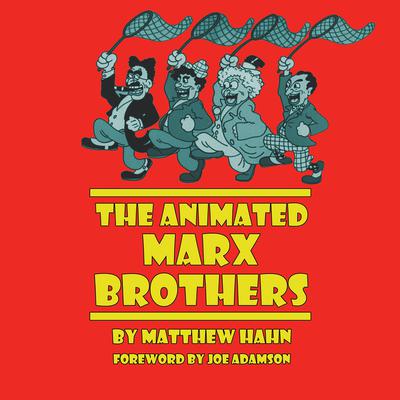 To many people, the Marx Brothers always seemed cartoonish. Small wonder that film animators plucked their personas from their first appearances in The Cocoanuts (1929) and Animal Crackers (1930) and caricatured them in countless animated appearances in theatrical cartoons. Their animated likenesses have since been wisecracking in television cartoons, direct-to-video movies, fan films, commercials, flip books, avatars, emoji, a slot machine, and two TV pilots so rare they were once thought not to exist.

At last, Marx Brothers fans can rejoice. Matthew Hahn’s search for every animated appearance of a Marx brother has trailed longer than Groucho’s coattails. His discoveries include the backstories of the studios, moviemakers, and stars, rare test drawings from the Smithsonian Institution National Portrait Gallery, abandoned projects, connections, coincidences, and apocrypha.

Through the reels of Silly Symphonies, Looney Tunes, and Merrie Melodies, to their comic clashes with Heckle & Jeckle, Oswald Rabbit, Krazy Kat, Pooch the Pup, Buddy, Cubby, Willie Whopper, Flip the Frog, and Popeye, journey back through the most detailed analyses ever compiled of animated Marx Brothers appearances. The author also draws from appearances in You Bet Your Life (1950), Quick Draw McGraw (1959), The Simpsons (1989), Tiny Toon Adventures (1990), and Animaniacs (1993), among many others.

“A treasure trove for Marxists of all stripes.” —Joe Adamson, author of Groucho, Harpo, Chico and Sometimes Zeppo

Matthew Hahn is an award-winning animated filmmaker, a published cartoonist, a lifelong rescuer of animals, and a pioneering Maryland craft brewer. He endowed Freedonia/Marxonia, an annual Marx Brothers festival held at State University of New York-Fredonia, with his wife, Cheri. They live outside Washington, DC, with two Tonkinese cats, Thelma Todd and ZaSu Pitts.